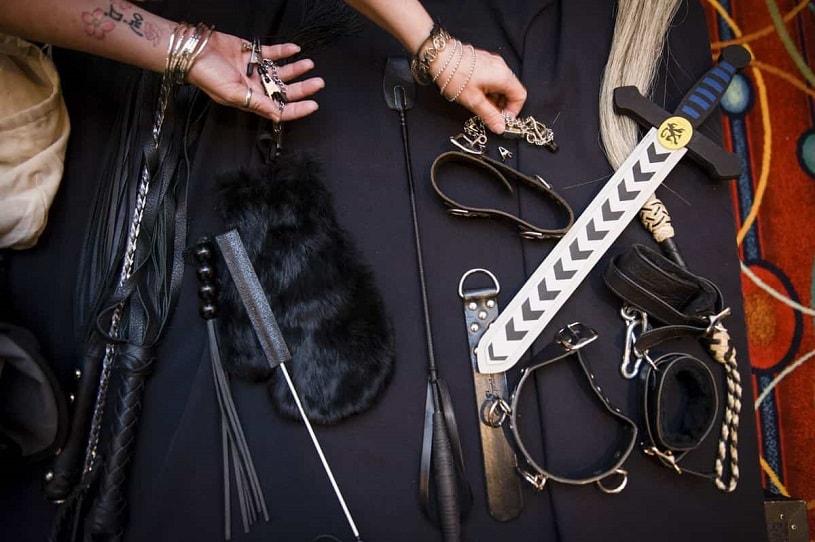 “You want to make sure that you narrate what is going to be happening,” a blond woman in a skintight nurse’s costume said. She had just demonstrated how to safely, and consensually, stick a willing partner with hypodermic needles.

The subject of her class was “medical play” and the crowd was standing-room-only. The event was hosted by the Eulenspiegel Society in Manhattan, which describes itself as the “oldest and largest B.D.S.M. support and education group” in the country.

The “nurse,” Margot, was not acting as a health care professional, though she did offer hygiene tips. She was there, with her role-play partner for the evening, June, to model best practices. (Many of those interviewed for this piece, including Margot and June, did not want to use their full or legal names for fear of stigma.)

“You create a container for the things that are your worst fears, your darkest fantasies, and you create very strong boundaries around that,” Margot said. “Respecting those boundaries is the most important thing.”

Those who practice bondage, dominance, sadism and masochism (B.D.S.M.) have rules for protecting boundaries, safety and consent. But the line between B.D.S.M. and abuse has been in the news after two politicians were accused of abusing their sexual partners.

In a report released in April, a woman accused Gov. Eric Greitens of Missouri of taping her hands to exercise equipment, hitting and shoving her, and touching her without her agreement. The woman also said she thought he had taken a photograph of her without her consent; charges brought on that account were withdrawn last week. “This was a great victory and a long time coming. I’ve said from the beginning that I am innocent,” Mr. Greitens tweeted. (The charges only addressed invasion of privacy.)

In May, four women told The New Yorker that Eric T. Schneiderman, then the New York attorney general, had assaulted them. Mr. Schneiderman defended himself by claiming he was participating in role play. He also said he wanted to “strongly contest” the claims, but that they would “effectively prevent me from leading the office’s work at this critical time.” He resigned hours after the investigation was published.

These situations bear little resemblance to consensual B.D.S.M. encounters, practitioners say. “There’s no demarcation in these abuse situations,” said Clarisse Thorn, author of “The S&M Feminist.” Of the reported incidents between Mr. Schneiderman and the four women, she said, “What these women are reporting is, ‘He would hit me without warning and he would keep going until he wanted to stop.’”

“There is a difference between abuse and B.D.S.M.,” said Gigi, a spokesperson for the The Eulenspiegel Society. “That difference is consent.”

What Is ‘Safe, Sane and Consensual’?

B.D.S.M. practitioners use the catchphrase “safe, sane and consensual” to summarize best practices for sexual encounters that mix with violence. Extensive conversations, negotiated checklists and safe words are tools for navigating consent.

Setting time constraints is also important, Ms. Thorn said, because most B.D.S.M. enthusiasts are not constantly “on.” She provided an example of how time limits can be established: “We’re going to do a scene right now,” she said, referring to an episode of role play. “We’ll demarcate that with one person wearing a collar and calling the other person ‘sir,’ and we’ll do it this evening and when it’s done, it’s done.”

Lola Jean, a sex educator and mental health professional, said it is important to tailor each experience to individual preferences and not assume that there is any one-size-fits-all approach to B.D.S.M. “It’s almost like a choose-your-own-adventure,” she said.

Participants have to know — and be able to describe and set — their own limits. “I can take a lot of punching and kicking, but for whatever reason, if you slap my face, I go emotionally to pieces,” said a longtime B.D.S.M. practitioner who goes by the name Ninja Juicer.

“It used to be you had a mentor,” said Cassandra Moon, a Brooklynite who has long identified as a dominant woman. “Someone you go and hang out with and they would play with their partners and you would watch them do so.”

Now, someone interested in B.D.S.M. might also go to a “munch,” a plainclothes gathering where people with different sexual interests meet and mingle. Dungeons provide another space for people to interact and explore their desires. Those spaces have rules and safety monitors, often dressed in bright orange vests, who are on alert for the use of safe words.

“Within the scene, the person receiving always has an out, a safe word,” Ms. Moon said. “If a safe word is used, then you stop everything immediately.”

‘You do not bring a mystery in.’

Safe words don’t work for everyone. Other practices include making checklists in advance and nonverbal gestures, such as a pinch of the knee. Some checklists “have 1 to 5 scales for how into something you are,” Ms. Thorn said. “If your partner is a 5 on being tied up and a 0 on face slapping, you can engage in B.D.S.M. while knowing very granular information about their boundaries.”

Some B.D.S.M. practitioners criticize the use of contracts or apps that codify an agreement. Preferences change, they say, and no one should feel locked into agreements when their boundaries may change over time.

“You shouldn’t bring in something that someone hasn’t discussed with you,” Ms. Moon said. “That’s so important in this thing. You do not bring a mystery in.”

“I went on a date with a vanilla guy, somebody who wasn’t involved in the community, and in the middle of the scene he started choking me,” a B.D.S.M. practitioner who goes by Salty Goodness said. “Luckily I felt safe enough and in a position to just be like, ‘Whoa dude, note that we did not talk about that. That’s not okay.’”

‘We just really like to be adventurous with our sexuality.’

Legally, though, people can’t consent to just anything.

“There’s an important body of law that declares it illegal to consent to certain types of physical harm, whether it’s sexual or not,” said Wendy Murphy, a professor of sexual violence law at New England School of Law. “You can’t consent to torture. You cannot consent to serious bodily injury.”

Practically, this means that strangulation, cutting or burning a partner could be prosecuted by law enforcement as assault and battery or aggravated assault — even if the victim consented.

“People who are not interested in kinky sex find it hard to understand, but some of us are just wired to really enjoy extreme sensations, whether it’s emotional or physical or mental challenge,” said Susan Wright, the founder of the National Coalition for Sexual Freedom, an advocacy organization.

June, the woman leading the demonstration at The Eulenspiegel Society’s class, said she enjoyed being poked with needles. “I have an elation, it is an endorphin rush that makes me proud of my body and what it can handle,” she said.

“To understand you have a kink, you’re already ahead of people,” said Ms. Jean, the sex educator. “To act on it and explore it, that’s the most noble thing. There’s no confidence like knowing yourself.”